Artistic and Academic Director of Symphony for Life 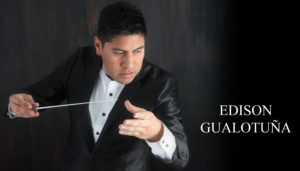 Edison Gualotuña studied in the National Conservatory of Music in Quito, Ecuador. He continued his studies in the Latin American Academy in Caracas, Venezuela. In 2013, he obtained a post-graduated degree in Orchestral Conducting at the Superior School of Music, Art and Performance in Oporto, Portugal.

Gualotuña has formed part of several important orchestras such as de Ecuadorian Philharmonic Orchestra (OFE) or the Youth Orchestra of Andean Countries. He has participated in several international tours, performing in recognized auditoriums like the primary hall of the Berlin Philharmonic and the UNESCO headquarters. In Venezuela he was part of the Simon Bolivar Symphonic Band and collaborated as a teacher in the youth orchestras within the orchestral system that exists in Venezuela. Additionally, in 2010, he formed part of the Youth Symphonic Orchestra Foundation of Ecuador (FOSJE) as a clarinet teacher and as the conductor of the youth orchestra in Quito. In 2015, Gualotuña directed the Wind Orchestra that is part of the “System” extension in Lisbon, Portugal.

He was named the Artistic and Academic Director of Symphony for Life in Esmeraldas, Ecuador in 2016. His experience and expertise guarantees de results of the program.

Violin teacher in Symphony for Life 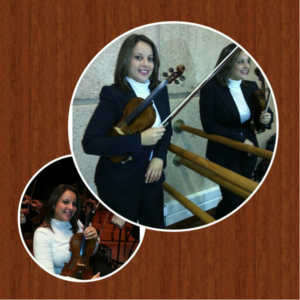 Jesmar Jatar started her musical studies when she was eight years old at the Nucleus of the National Youth Orchestra in Venezuela “Juan José Landaeta”. In 2013 she graduated from the National University of Experimental Arts (UNEARTE) in Venezuela with a Degree in Music with a mention in Musical Education. Additionally, she participated in an Orchestral Conducting course in Caracas with David Cubek, leading the Youth Orchestra of Altos Mirandinos.

Jatar formed part of the National Symphonic Youth Orchestra in Venezuela and later the Simón Bolivar Symphonic Orchestra of Venezuela. She performed in several world stages under the baton of many recognized conductors such as Gustavo Dudamel, Claudio Abbado, Giuseppe Sinopoli, among others.

Currently, she is the Violin teacher in Symphony for Life. Her dedication and knowledge is key for the enrichment of the students in the program. 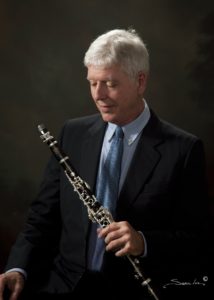 Clarinetist Albert Hunt performs in chamber music and solo concerts throughout the United States, Latin America, Asia and Europe. He earned the Doctor of Music Arts Degree at The Juilliard School, and has performed in the clarinet sections of the Cleveland Orchestra, the New York Philharmonic and the Orchestra of St. Luke’s. A highly-regarded and committed teacher, Dr. Hunt has presented masterclasses throughout the United States and in Korea and South America. His students have been finalists in national and international competitions. Dr. Hunt is also International Coordinator of Sinfonía por la Vida, which provides instruments and lessons to Ecuadorian children from the margins of society.  To find out more, please visit www.AlbertHunt.net.

Violinist Rachelle Betancourt is currently a member of the Frankfurt Radio Symphony in Germany. After graduating summa cum laudefrom Rice University, she received a Fulbright Grant to study in Duesseldorf, Germany with Ida Bieler at the Robert Schumann Hochschule, where she earned both the Konzertexamen Diploma and Chamber Music Certificate with highest honors. She has won competitions at both the international and national levels, and she regularly performs chamber music and solo concerts in the Americas and in Europe.
“Working with the children of Sinfonía por la Vida in Esmeraldas was a wonderful experience. Their boundless enthusiasm was inspiring to me as a musician and a teacher, and I am looking forward to continue to guide them to reach their artistic potential”